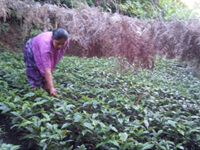 When we first met Mercedes Tipol, she looked like a Guatemalan teenager. In fact, she was twenty-eight with five children and had never been to school. She had married at fourteen to Climaco Cucul, a coffee farmer. He made most of the family’s decisions. When Mercedes needed funds to buy beans or sugar, for example, he gave her exactly the amount she needed. He also wanted to know where she was going and why. Sometimes he did not allow her to leave the house.

We got to know her at a project developed by Strategies for International Development (SID), designed to help women improve their public speaking. At first, Mercedes hardly spoke. She felt uncomfortable speaking in public, especially before men who had received education, who had traveled to work in cities, even to Honduras. Men were used to talking in public, to asking questions, seeking clarifications, offering comments.

But Mercedes along with other farmers’ wives wanted to participate in the technical assistance sessions in better farming practices. SID started monthly training sessions in which these women solved common problems and set personal goals. They discussed topics familiar to them; everyone had an opportunity to speak. What happened? Their talk about problem-solving and goal-setting empowered them. They began to develop leadership skills as well as public speaking.

But that wasn’t all. Over the year and a half that she has participated in the monthly sessions, growing more self-confident, Mercedes started a coffee-tree nursery. Now she grows some five thousand seedlings a year. She sells them for one quetzal each, making about $685 a year. 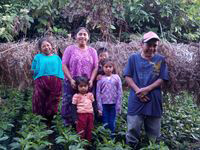 With income from the seedlings, she also began raising chickens. She keeps a coop of about fifty birds and buys her own feed. She sells about ten chickens a month for between seventy and one hundred Quetzales each. In a year, those sales bring in between $1,233 to $1,644. Thanks to her growing self-confidence, she now participates equally in the technical assistance provided by SID and has seen her family’s income from coffee grow.

Mercedes’ husband has grown as well and now helps her with her coffee tree nursery. He shovels soil and transplants seedlings from the seedbeds in which they start life to the plastic sacks in which they grow.

Mercedes has begun to feel better about life. Greater income means better opportunities for the five children, her oldest is fourteen and her youngest three. Mercedes can neither read nor write, but she has started two businesses and increased the family’s income, thanks to her own initiative and the public speaking sessions provided by SID.