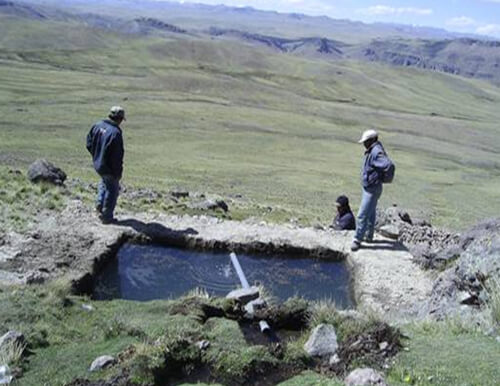 Strategies for International Development (SID) works in the Southern Sierra of Perú. The Sierra region is the mountainous central region of the country, created by two parallel mountain ranges that run up the west coast of South America. In the southern part of Perú, the two mountain ranges are 200 to 300 miles apart and they are bridged nearly to their mountaintops by a huge high plain, which is called the Southern Sierra.

Most of Perú’s poor live in the Southern Sierra, and the great majority of them are small farmers. The Southern Sierra is a huge pasture, and the farmers earn their income from alpaca and cattle. In most of this region, farmers raise alpaca for fiber and meat. Alpacas produce extremely fine wool, which is highly prized for making sweaters and other knitwear. Perú is home to 87% of the world’s alpaca.

Farmers on the eastern edge of the Southern Sierra, near Lake Titicaca, raise cattle for milk and beef. Cattle need more water than alpaca, and the area near the Lake has more rainfall and better pastures. Also, the urban population of the Southern Sierra lives in the eastern portion of the region, and there is a growing demand for fresh milk, cheese, yogurt, and beef in the cities of the Cuzco, Juliaca, and Puno, from both the residents and the tourists that visit these areas each year.

SID has worked in both the dairy and alpaca areas, helping farmers conserve water, reclaim pastures, and increase their productivity and income.

Environment and Agriculture in the Same Project: 2000 to 2004

From 2000 to 2004, Strategies for International Development (SID) helped 23 Perúvian Non-Governmental Organizations (NGOs) achieve environmental and agricultural goals within the same project. Farmers were not participating in environmental projects because they did not address the central problem of the farmers, increasing income. Conversely, gains from solely agricultural projects were not sustainable because they did not include soil and pasture reclamation and the Southern Sierra is a highly eroded semi-arid plain. Poverty and soil erosion were inextricably connected, for each was the principle cause of the other, and both problems needed to be addressed in the same project.

SID helped NGOs re-design projects to address both environmental and agricultural goals, use more effective strategies to help farmers achieve these goals, and evaluate their results. By 2004, SID had assisted 23 NGOs, working in 217 communities with 10,987 farm families. These farm families increased their income by an average of 25% and reclaimed an average of 0.43 hectares per family during the period of technical assistance. (Loyd Brown, 2004)

In 2005, SID began a three-year program to help 17 producers’ associations in the area near Lake Titicaca to increase their income from a variety of products and services such as fresh milk, cheese, yogurt, cattle fattening, woolen goods for the tourist trade, and tourist services on the islands on Lake Titicaca. We helped each producers’ association assess their market, identify opportunities for increasing sales, and then increase their productivity and product quality in response to these opportunities.

All 17 associations had opportunities for increasing income, and they all made some progress in increasing productivity, product quality, and income. But the producers of woolen goods were rural farm-women, and they faced competition from women in the city of Juliaca, who worked together in semi-industrial fashion to produce woolen goods. Also, the providers of tourist services in the area near Lake Titicaca and on the islands in the Lake found that their increases in services and income were limited by local tour operators and international tourist agencies. As such, the associations producing fresh milk, cheese, yogurt and fattening cattle achieved the largest increases in sales and income.

Perú’s national government enacted a Participatory Budgeting Law which required that citizens select the projects carried out by their municipalities. However, the six-step process recommended by the government was extremely cumbersome and it focused on administrative procedures rather than methods that increased citizen participation and the quality of the projects selected. SID helped citizens and municipal officials in four municipalities in the dairy area, and five municipalities in the alpaca-wool area of the Southern Sierra to produce a better process.

We helped municipal officials reduce carry-over costs from previous projects so that citizens knew exactly how much money was available for new projects. We helped citizens use a three-step process for selecting projects, which allowed the members of each community to discuss priorities and select the project that was most important for their community. We helped citizens define the farming practices they needed to adopt in order to increase productivity and income, and then define how the municipality could help with infrastructure and inputs. Citizen participation more than doubled, and the feasibility and quality of projects increased as a result of this.

Alpaca-Wool Producers in the Highlands of Arequipa: 2008 to 2012

In 2008, we began helping 950 alpaca wool producing families in five municipalities in the highlands of Arequipa to reclaim their eroded pastures, sort and classify their wool prior to sale, and increase their income. The 950 families had a total of 140,000 head of alpaca. Their pastures were 13,000 to 15,000 feet above sea level, and raising alpaca for wool and meat was the only agricultural activity and income-earner at such high altitude. Fortunately, it was a good one, if they conserved their pastures, and increased the health and productivity of their alpaca, and sorted and classified their wool prior to sale.

SID helped representatives of the 950 farm families meet and negotiate with 9 exporters and wool processors. They learned the value of sorting and classifying their wool prior to sale, and they negotiated an average of 9.5 Soles per pound for fine wool and 8 Soles per pound for regular wool, which was a significant increase over the baseline of 4 Soles from a local buyer (3 Soles = $1.00). We trained farmers in sorting and classifying wool, and we also helped them improve the selection, pasturing, and health of their animals. The farmers increased in the productivity for a range of 3 to 2.5 pounds per alpaca to an average of 4.2 pounds. They sorted and classified a third of their production and sold it directly to exporters, and they increased their income by 68%.

Dairy Farmers near Lake Titicaca: 2013 to the Present

In 2013, SID began a new program to help farmers in the dairy area of the Southern Sierra increase their income from fresh milk.We help the dairy farmers meet and negotiate with buyers, make business plans, and improve their business decisions and management. We also help them improve the breeding and health of their dairy cows, dig farm ponds for better year-round watering, and cut and store fodder for better feeding.

The farmers in the Eastern portion of the Southern Sierra, near Lake Titicaca, raise cattle for milk and beef. Cattle need more water than alpaca, and the area near the Lake hasbetter pastures, water, and rainfall. The soil has higher moisture content and the water table is closer to the surface. When the rains are heavy, the Lake rises and floods the surrounding area, and evaporation from the Lake causes more rainfall.

There is a strong demand for milk, cheese, yogurt, and beef in the cities near Lake Titicaca (Cuzco, Juliaca, and Puno), both from residents and the hundreds of thousands of tourists that visit Macchu Picchu and Lake Titicaca each year. Also, Grupo Gloria, Perú’s major milk processor, is building a milk processing plant in the area, where they will condense milk for sale throughout the country.

SID is helping 365 members of 12 dairy producers’ associations in the municipalities of Atuncolla, Caracoto, Huata, and Capachica to meet and negotiate with milk processors, analyze alternatives, and make business plans.  We also help them increase their productivity by improving the health, watering, and feeding of their cows.  They select their cows more carefully, give them vitamins and minerals, dose them against parasites, construct cowsheds, and shelter their cows during the cold Southern Sierra nights.  They are also digging farm-ponds for better watering throughout the dry season, growing fodder oats and alfalfa for better feeding during the dry season.  Additionally, they are reclaiming soils and pastures by putting eroded pastures into reserves, reseeding pastures, improving delineation of pastures, and establishing stricter rotation for grazing.

The farmers increased their productivity from 4.7 to 7 liters of milk per cow per day, and their average income from $425 to $656 in the first year of the project.

SID provides small loans to dairy farmers and cattle fatteners. We currently make loans to approximately 100 borrowers, the loans range from $500 to $700. The interest rate is 3.0% per month. We make the loans to solidarity groups of three to five borrowers in order to reduce administrative costs and risk. The loan cycle is five to six months, with a single repayment of principal and interest at the end of the cycle.

SID is the only micro-lender located in the four municipalities, and our loan program is designed to serve the unique needs of the dairy farmers and cattle fatteners.  Micro-lenders in the city of Puno often use a shorter loan cycle with periodic repayments that does not respond to the needs of the farmers. Cattle fatteners sell their cows and buy new ones twice a year.  Also, dairy farmers make their investments at the start of each rainy or dry season, and each season lasts five to six months. The micro-lenders in Puno often prefer to organize borrowing groups in communal banks of 30 to 35 members to further reduce administrative costs, but dairy farmers and cattle fatteners are dispersed throughout the area, making it difficult to organize five to seven borrowing groups into a communal bank.

The current default rate is below 1%, and SID has established a loan-loss reserve of 2% of the portfolio. The six-month loan cycle and evaluation of results help us monitor conditions in the dairy and beef industries, as well as the business activities of the borrowers. The cycle and evaluation also help us take action, as necessary, to reduce risk and protect the portfolio.

Dairy Farmers near Lake Titicaca: 2013 to the Present

In the first year of the project, the farmers were able to increase their productivity from an average of 4.7 liters per cow per day to 7 liters per cow per day.  In addition, as a result of better understanding of their market and better business decisions, they were able to increase the price they received from 0.90 cents of a Sol (1 Sol = $0.31) to 1.00 Sol per liter of milk.  And they increased their average income from $425 per year to $656 a year.

Alpaca-Wool Producers in the Highlands of Arequipa: 2008 to 2012

The 950 farm families increased their productivity from a range of 3.0 to 3.5 pounds of wool per animal to an average of 4.2 pounds. They also sorted and classified a third of their production and sold it directly to exporters for much higher prices. As a result, they increased their income by 38%.