Strategies for International Development (SID) works on the Altiplano, a semi-arid plain which ranges from 11,000 to 14,000 feet in altitude. It is a huge natural grassland, with few trees. It was first inhabited by alpaca and llama, and the earliest civilizations in South America settled on the Altiplano because of the meat, wool, and hides that the animals provided. The Altiplano was always the center for Bolivia’s population and economic growth. However, the rapid growth of population from the mid-20th century onward put extreme pressure on the land, dramatically increased erosion, and reduced productivity. This, in turn, accelerated migration from the rural areas of the Altiplano to the cities, the Inter-Andean Valleys, and the Tropical Plains. Nonetheless, more than 1.25 million, approximately 46% of Bolivia’s rural population, still farm on the Altiplano (CNPV, 2001).

In the Northern Altiplano there is more rainfall, the rural areas are more densely populated, and farm holdings are smaller (1 to 3 hectares per family). There is less rainfall in the Central and Southern Altiplano, the rural area is less densely populated, and farm holdings are larger (10 to 15 hectares per family).

Farmers throughout the Altiplano traditionally grazed their animals on natural pastures. In the past few decades, farmers in the Northern Altiplano have been growing rye as a fodder crop for their dairy cows and, more recently, alfalfa. 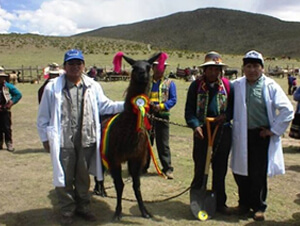 Farmers grow potatoes for their own consumption and for the market. They also freeze-dry their potatoes as a means of storing them, and there is a good market in the cities for the freeze-dried potatoes (chunyo and tunta) to add to soups and stews. Farmers in the Northern Altiplano also grow fava beans for home consumption and the market.

Altiplano farmers began growing quinoa 3,000 years ago, and they continued to grow it for home consumption during the colonial period. In the last three decades, quinoa has attracted an international following and demand because of its high protein content, and farmers in the Southern Altiplano began growing it for export in the 1980’s and 90’s. In the last few years, farmers in the Northern Altiplano have also begun growing quinoa for the international market.

GRADUATING POOR FARMERS FROM POVERTY: 1996 to the Present

In 1996, SID began helping 1,630 dairy families in 50 communities in the Municipalities of Patacamaya and Umala in the Central Altiplano to reclaim land and increase their income. We used competitions among communities to mobilize the farmers to adopt the practices that reclaimed their pastures and increased productivity of their dairy cows. At the start of each dry and rainy season, the farmers selected the practices they would adopt during the season. SID then provided technical assistance in these practices throughout the season. At the end of season, the farmers evaluated their results.

In three and a half years, farmers reclaimed 1,593 hectares of land by digging water retention ditches, damming gullies, and re-seeding pastures, and another 70 hectares by constructing terraces. They also reclaimed 14,307 hectares by creating reserves in which the land was not grazed for four to five years. They put 27,341 hectares of pastures under strict rotation. They also immunized their cattle, dug 727 farm ponds, constructed 202 cowsheds, and sowed 1,553 hectares of alfalfa. They increased their productivity from 5.3 to 10.7 liters of milk per cow per day and their income by 64%.

Environment and Agriculture in the Same Project: 2000 to 2004

From 2000 to 2004, SID helped 35 Bolivian Non-Governmental Organizations (NGOs) achieve environmental and agricultural goals in the same project. Farmers were not participating in environmental projects because they did not address the central problem of the farmers, increasing income. Conversely, gains from solely agricultural projects were not sustainable because they did not include soil and pasture reclamation and the Altiplano is a highly eroded semi-arid plain. Poverty and soil erosion were inextricably connected, each was the principle cause of the other, and both problems needed to be addressed in the same project.

SID helped NGOs re-design projects to address both environmental and agricultural goals, use more effective strategies to help farmers achieve these goals, and evaluate their results. By 2004, SID had assisted 35 NGOs, working in 1,184 communities with 30,246 farm families. These farm families increased their income by an average of 23.3% and reclaimed an average of 0.93 hectares per family during the period of technical assistance. (Loyd Brown, 2004)

From 2003 to 2006, SID helped 800 dairy families in 25 communities in the Municipality of Pucarani and 650 families in 30 communities in the Municipality of Sica Sica to reclaim eroded pastures and increase their income from fresh milk. The farmers reclaimed pastures by digging water infiltration ditches in compacted soils, damming gullies, collecting grass seeds and re-seeding pastures, and putting severely eroded pastures into reserves where they were allowed to re-flower and reclaim themselves naturally. They increased the productivity of their cows by improving animal selection and male/female ratios, dosing their cows against parasites, cutting and storing fodder for better year round feeding, and digging farm ponds for better year round watering.

We also helped the farmers make business plans in order to make better decisions on how to invest their land and labor. They saw the relationship between the better pastures, feeding and watering, productivity, and income. They made plans to increase productivity and income based on the farming practices they would adopt in order to reclaim pastures and improve the feeding, watering, and health of their cows. Their baseline productivity was 4 to 6 liters of mild per cow per day, most farmers planned to double their productivity and income, and two-thirds of the farmers achieved their goals.

From 2007 to 2009, SID helped alpaca and llama-wool producers make better business decisions, reclaim eroded pastures and marshes (bofedales), increase the productivity of their animals, and increase the percentage of white-wooled animals. We worked with 900 alpaca and llama families in the Municipality of Curahuara de Carangas in the heart of Bolivia’s principal alpaca and llama area in the Central Altiplano. The farmers grazed their alpaca and llama in pastures and marshes watered by streams flowing from the snow-capped mountains on the Chilean border. However, the pastures were eroding, the marshes were drying out, and the market for wool had changed dramatically. The price for white wool was twice the price for brown, beige, or black, because it could be dyed to any color that was in fashion, yet only 26% of the farmers’ animals were white.

We helped the farmers reclaim pastures and marshes by digging channels from streams to pastures and marshes, harvesting grass seed and re-seeding pastures, putting eroded pastures into reserves, and establishing stricter delineation of pastures and rotation of grazing. We helping them increase productivity by improving animal selection and male-female ratios, dosing them for internal parasites, treating them for scabies, and sheltering them in rustic corrals during the freezing Altiplano nights. They also began breeding more white-wooled areas and shearing a higher percentage of their animals. In two years, they increased their income from wool from an average of $282 to $393, or 39%, a year from wool.

Since 2000, Altiplano farmers that produced a common product had been forming associations to help each other solve common problems and sell their product together. In 2007, we began a 5-year program with 81 of these associations in 12 municipalities in the Northern and Central Altiplano. The members of the associations earned their income from a variety of products such as fresh milk, cheese, yogurt, quinoa, potatoes, seed potatoes, alpaca and llama wool, and llama jerky. The associations represented nearly all the comparative advantages of the Altiplano, and they were an excellent demonstration of the variety of ways in which Altiplano farmers could earn a good living from their farming.

We helped members of each association to meet and negotiate with buyers, make business plans, and increase their productivity, product quality and processing in response to the opportunities of their markets. We also helped them draft bylaws and job descriptions to organize their work, use written agreements and basic accounting for all transactions, obtain legal status, and achieve at least 80% of the objectives of their business plans. Finally, we helped them participate in the annual planning and budgeting of their municipality and present credit applications to micro-finance institutions.

The baseline income of the 4,313 members of the 81 producers’ associations was $5.4 million. Their planned increases in income, taken directly from their business plans, were $10.6 million. Their actual increases were $9.0 million.

Quinoa Producers’ Associations: 2012 to the Present

Quinoa farmers throughout the Northern Altiplano have formed producers’ associations to support each other in increasing productivity and product quality and to sell their quinoa together for a higher price. SID helps these associations adopt the farming practices that achieve these aims. We also help them adopt basic business practices and rotate and fallow their farmland to reduce erosion. In addition, we work with rural radios to provide quinoa price and market information and with local workshops to make better threshers and winnowers for quinoa as well as screens to separate the larger export-quality grains from the smaller ones.

Prior to the program, the farmers sold their quinoa to intermediaries, and they did not make business or land-use plans. We help them make business plans, fallow the land used for crops to avoid erosion, and sell directly to exporters. Farmers used ordinary seed and sowed their fields by broadcasting the seed by hand. We help them use certified seed and sow their grain in furrows for better productivity. They threshed their grain on the bare ground with animals or flails. As a result, there was dirt and small stones in the grain, and they received a very low price for their poor-quality quinoa. We help them thresh their grain on sheets of plastic by driving back and forth over it with a light vehicle, and use winnowing screens to separate the broken bits of the stalks from the grain.

Prior to the program there was neither price information nor local production of threshers, winnowers or grain-size separators. We helped establish a price information system via rural radio stations, as well as the local manufacture of affordable equipment that saves labor and increases quinoa quality at the same time.

In April 2015, the 298 members of the first group of 10 quinoa associations graduated from the project. They had completed three years of assistance from SID, and they had adopted basic business practices and the farming practices for increasing productivity and product quality and controlling erosion. Productivity rose from 7.61 to 11.87 quintals per hectare, their quality from third to first quality, and their income from $508 to $1,985 a year, which is more than they could earn from a job in the city.

The second group of 16 quinoa associations now has 564 members, and they will graduate from the program in April 2017.

Producers’ Associations, Quinoa: 2012 to the Present

There was a quinoa boom and sharp increase in price in 2013. Famers reduced their land-use cycle from two years farming and five years fallowing to farming the same field for four or five years and only fallowing it for two or three. SID helps the farmers make land-use plans and return to their traditional farming-fallowing cycle, while at the same time increasing the productivity of land under cultivation. In addition, we help them sow a cover crop of native grasses in order to protect their land from wind erosion while it is being fallowed. Erosion by rainwater is also a problem, especially in compacted soils. Thus, we help farmers to dam gullies and dig water infiltration ditches so that rainwater sinks into the soil rather than washing away the topsoil.

The ratio of increases in farmer income to project costs is 8.59 after four years.