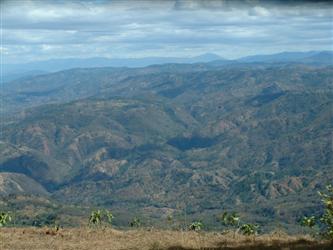 The two project areas are similar. The farmers have small plots of land; they grow corn and beans for home consumption; and coffee is the ideal cash crop. Both areas are 1,300 to 1,700 meters (a mile) above sea level, and farmers in both areas grow coffee for their income. Also, the coffee produced at these high altitudes is classified as “strictly hard” coffee, and exporters pay approximately 50% more for this type of coffee than they pay for the softer coffees produced at lower altitudes.

However, the farmers earn only a small portion of what they could earn from their coffee. They have low productivity, and they need to improve the shading, pruning, and fertilizing of their trees in order to increase their production and income. Also, they don’t husk their coffee. They sell it to local buyers called “coyotes” rather than husk it and sell it directly to exporters for a higher price. 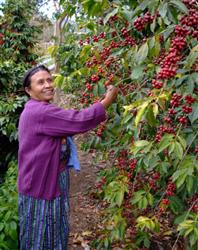 Coffee plots at high altitudes are usually free of the plant diseases that infect coffee trees at lower altitudes. But in 2012 a major outbreak of coffee leaf rust swept through Central America, infecting coffee trees in Northern Chimaltenango and Alta Verapaz as well as those at lower altitudes. The leaf rust is a fungus that attaches itself to the underside of the leaves of the coffee trees and reduces photosynthesis, the growth of the leaves, and the coffee fruit. As a result, farmers need to spray their trees with copper sulfate and lime to protect them against leaf rust.

The farmers live and farm on mountainsides, and they need to terrace their land to protect it from erosion. They use firewood for cooking, and they need to re-plant trees they cut to prevent mudslides during years of heavy rain.

SID is using a regional approach that gives all poor farmers producing a common cash crop the chance to graduate from poverty. We are applying this regional approach with 18,380 coffee-farming families in Guatemala’s poorest department, Alta Verapaz.

Alta Verapaz has 26% of Guatemala’s coffee farmers, and they produce high-quality Arabica coffee. They are poor because they have low productivity, and they sell un-husked coffee to local buyers rather than husk and sell directly to exporters. They earn less than $200 a year from their coffee when they could earn at least $700.

The Goals of the Project are:

The five core activities of the approach are:

The General Population. At the start of the project, 767 farmers from 191 communities defined 28 practices they needed to adopt in order to graduate from poverty — 8 for increasing productivity, 7 for husking coffee for a higher price, 7 for conserving their mountainside land, and 6 for making better business decisions. Attachment 1 is a detailed list of all 28 practices.

Our local partners, municipal officials and primary school teachers, teach and promote the practices. However, in the second and third years of the project, 2020 and 2021, meetings with farmers were suspended, schools were closed, and the increases in both knowledge and adoption leveled off. Fortunately, COVID has been controlled in the region and municipal officials are once again meeting with farmers and schools have opened.

Conservation is the percentage of land on which farmers apply all seven mountainside conservation practices. The early-adopter farmers can conserve 1,500 acres of mountainside farmland, and they are now conserving 770 acres.

Women in Guatemala’s poorest department, Alta Verapaz, are setting personal goals and solving common problems, increasing their empowerment as well as their public speaking, and becoming leaders and more effective members of their communities. They are also making business plans, learning the best practices for the businesses of their choice, and building successful businesses. The business growth and personal growth encourage and reinforce each other, and together they increase women’s equality.

The project can be carried out in conjunction with an agricultural program, a health, nutrition, or micro-lending program in rural communities, or implemented as a stand-alone project.

Some women had two or three years of primary school, but most had none. Many of the women do not speak Spanish, and all assistance is provided in Poqomchi or K’ekchi, the two Mayan languages spoken in Alta Verapaz.

Church leaders use Bible passages to tell women that the man is head of the family and they should submit to their husbands. Men tend to dominate the public speaking, decision-making, and any opportunity for technical assistance because they have more education, speak Spanish, have traveled to the cities and nearby Honduras, and are simply accustomed to dealing with organizations from outside the community.

The women bear more responsibility than men for raising children, and they cannot leave and take their children with them to look for a job in the city. There is little to no salaried labor in rural communities, and their best opportunity for a career and income is a family-farm enterprise.

Women in all three municipalities increased their empowerment and leadership in a variety of ways. They reported becoming leaders in their churches, savings groups, and PTAs; some reported becoming members of their male-dominated community development councils; and nearly all reported voicing their opinions in meetings.

Coffee is the major cash crop in Alta Verapaz, and 90% of the women started or expanded coffee-growing businesses either with their husbands or by themselves. 531 women in San Cristóbal and Carchá developed coffee businesses with their husbands or on their own. They increased their productivity from 284 to 373 pounds per 1/9th of an acre, husked 19% of their harvest and sold it directly to exporters, and increased their income from $294 to $438 from coffee.

311 women in 24 new communities in Cobán increased their productivity from 173 to 195 pounds per 1/9th of an acre, husked 16% of their harvest, and increased their income from $106 to $147 for a gain of 29%. This was the second project year for women in San Cristóbal and Carchá, but the first year for those in Cobán.

Also, 98% of the women started or expanded second businesses producing eggs, chickens, pigs, ducks, turkeys; fruit, vegetables, cardamom; coffee seedlings, and ground coffee, and they earned an average of $134 a year from these second businesses. Strategies for International Development (SID) began its first project in Guatemala in Northern Chimaltenango, the first of the Western Highland departments. We helped 600 farm families in the municipalities of Comalapa and San Martin find new buyers for their cash crops, make business plans, reclaim their hillside land, and increase their productivity and income. In 2005, SID expanded the program to another 600 families in 25 communities in the nearby municipality of Poaquil.

In 2007, SID changed the program to focus exclusively on coffee because coffee is the major cash crop in the region, and it offers the best opportunity for helping farmers make the full transition from subsistence to commercial farming. Most of the farmland is on mountainsides, and coffee is the ideal cash crop because the trees help hold the soil.

SID began the program with 1,044 coffee-farming families in 35 communities in the municipalities of Poaquil, Comalapa, and Jilotepeque. At the outset of the program, the farmers averaged 5 quintals of coffee (500 pounds) per 1/4 acre. They did not husk their coffee, and their average annual income from coffee was $131.

Every year we helped them meet and negotiate with exporters, assess their alternatives, make business plans, and improve their business decisions. During the remainder of the dry season and rainy season from April to November, we helped them increase their productivity by shading and pruning their trees and fertilizing them at least three times during the rainy season. We also helped them terrace their land and soil erosion on their hillside land. During the harvest season from December to March, we helped them husk and dry their coffee and sell it directly to exporters to gain a much higher price. 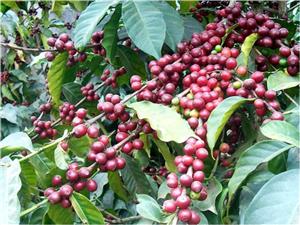 In latter 2012, a severe attack of leaf rust swept through Central America.  The leaf rust is an airborne, rust-colored fungus that attaches itself to the underside of the leaves of coffee trees and reduces photosynthesis and the growth of the leaves, coffee blossoms, and fruit. In the 2012/13 coffee year (April 2012 to March 2013), productivity fell by 13%. Most of the coffee was too small to husk, and husking fell to 7%. Average income fell by half, from $1,058 to $520.

In response, SID nearly doubled the number of families in the project and focused on helping them combat the leaf rust. We helped 4,402 farm families spray their coffee trees with copper sulfate and lime to kill the leaf rust. They also sprayed their trees with an anti-fungal, and they replaced severely infected trees with new coffee seedlings. In addition, they pruned their shade and coffee trees more aggressively to reduce the humidity in their coffee plots.

The famers gradually controlled the leaf rust, and in the 2013/14 coffee year they returned their productivity to 15 quintals per 1/4 acre, increased their husking and sales directly to exporters to 30% of their harvest, and they regained most of the income they had lost to the leaf rust by achieving an average income of $793.

In March 2016, SID graduated a third of the farmers from the project in Northern Chimaltenango and began a new project with coffee farmers in the Department of Alta Verapaz. For more information on this project, please go to Current Program.